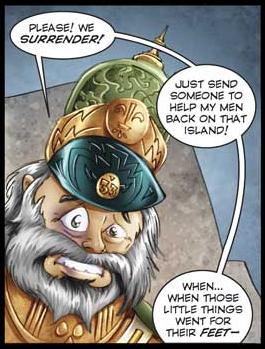 Sometimes you even surrender for them.
"I tell you, as officers, that you will not eat, sleep, smoke, sit down, or lie down until your soldiers have had a chance to do these things. If you hold to this, they will follow you to the ends of the earth. If you do not, I will break you in front of your regiments!"
— Field Marshal Sir William Slim
Advertisement:

A commanding officer insists that his men are the top priority. This is a rich source of conflict, as every commanding officer cares for a different group of men. The largest body generally takes overall priority, though a The Men First approach by the smaller constituent units can lead to greater losses overall as per 'the Tragedy of the Commons

Medical attention for the wounded is a high priority — especially if doctors are trying to treat the officer, and his injuries are less serious — as is No One Gets Left Behind, but in less critical situations, he keeps an eye on such things as their shelter and food.

He may inform anyone who finds it strange that it is his men who win his battles. This is most likely when an Officer and a Gentleman is insisting on it for soldiers who are not Blue Bloods, but any officer who is not A Father to His Men may express surprise.

He may insist on getting no help at all if his men can't be helped. Compare In Its Hour of Need; the commander will retreat if his men can be gotten away.

Note that this does not preclude ruthless expenditure of his men when necessary, just don't expect him to be happy about it. However, unlike the Glory Hound he will never expend them to benefit himself and he will never waste them through incompetence as the Modern Major General or General Failure might. Appeals to him to surrender may be made on the basis of ending his men's suffering, but might not succeed if he cares enough for a bigger picture which demands a Last Stand.

If he is at the top of a chain of command with several ranks between him and the grunts, he will generally insist that his subordinates follow his example — or else.

Lower-ranked soldiers can also insist on help going to others, but that generally falls under The Power of Friendship and Greater Need Than Mine.

Compare Greater Need Than Mine. Contrast Moral Myopia; officers who do not fall under this often fall under that. We Have Reserves is the inverse attitude of this.

Not to be mistaken for the opposite of "women and children first".