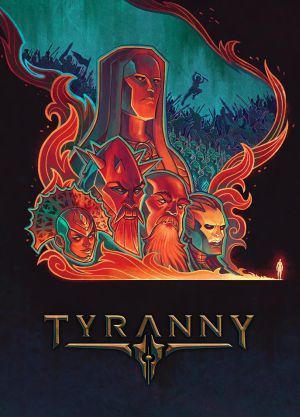 Tyranny is a Dark Fantasy Role-Playing Game, developed by Obsidian Entertainment and published by Paradox Interactive. It uses the same engine as Pillars of Eternity. It was released on November 10, 2016. It builds upon the mechanics used in Obsidian's previous title, and it also contains a number of options to adjust the difficulty of the game, in response to players' concerns. The game's most obvious twist lies in its premise - in a grand conflict between good and evil, evil has emerged victorious, and the player is placed in the shoes of an enforcer of the Evil Overlord.

The game is set in the world of Terratus, a High Fantasy world undergoing the very end of its Bronze Age and on the verge of ushering in an Iron Age. For 400 years, an enigmatic overlord, known as Kyros, has waged a campaign to put all of Terratus under their control, with the stated goal of imposing their peace and order upon the world. Three years ago, the legions of Kyros succeeded in the final leg of their conquest, when the small peninsula of the Tiers was finally brought to heel.

Yet the Overlord's victory is still not absolute, as rebellion rises in the former Tiersman kingdom of Apex. Normally, such a problem should be a minor issue for the might of Kyros' armies, but bickering and infighting in their ranks has allowed the rebellion not only to survive, but also putting up a surprising amount of successful resistance. Unhappy with their armies' performance, Kyros has a representative send out to the area to smooth over the reconquest process. This representative is the Player Character, an enforcer of the law and "justice" of Kyros' regime — a Fatebinder. It's up to players what they do with the power given to them.

A more extensive expansion pack, Bastard's Wound was released on September 7, 2017. Bastard's Wound takes the player to the eponymous region of the Tiers, where they encounter an illegal refugee settlement. Bastard's Wound also contains additional quests for the companions Verse, Barik, and Lantry; Kills-In-Shadow, Eb and Sirin received opportunities to earn themselves an artifact each.

See the webpage for the game here