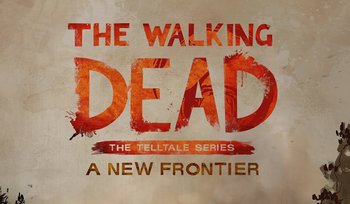 Javier: This really necessary?
Clementine: I don't know you, I don't trust you, and I'm not taking any chances. So it's safer for both of us if you're tied up.
Javier: Hey, that's fine with me. I don't trust you either.
Clementine: Glad we understand each other.
— "The Ties That Bind"
Advertisement:

Season Three introduces the new main character Javier Garcia, who takes charge in protecting his blended family from rampaging zombies, a human civilization of questionable morality, and internal divisions. Along the way, he allies with Clementine, who is now a rugged survivor on the hunt for a lost loved one.

Be warned: with all episodes of A New Frontier now released, this article will have spoilers, and some may be unmarked. Proceed at your own discretion.