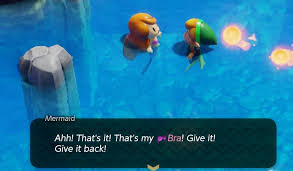 "If you're a little sick, you'll find panties and lipstick!"
— Brentalfloss, Cave Story With Lyrics
Advertisement:

One of the key elements of the Kleptomaniac Hero is that he will search though people's drawers. Some games will lampshade what you are doing by rewarding you with... well, people's drawers.

See also Panty Thief, who is actually looking for underwear.

Hey! What are you doing? Put those back!