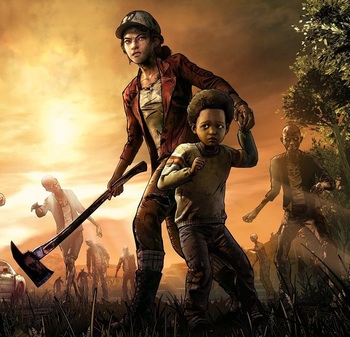 "I'll protect AJ with my life. Just like Lee... did for me."
"You'll die protecting him. A walker you didn't spot. A bullet you couldn't dodge. A desperate cry for help that brings the herd. It happened to Lee... and it'll happen to you."
— Lilly
Advertisement:

The Walking Dead: The Final Season is the fourth and final installment in the Telltale Games The Walking Dead series. Taking place a few years after the previous game's end, Clementine has found AJ and is now taking care of him in the walker-infested, apocalyptic world. During a supply venture, the two encounter the residents of Ericson's Home for Troubled Youth, a group of children and teenagers abandoned by adults but still surviving.

Clem and AJ fit in nicely at Ericson's, but quickly find themselves entangled in the residents' internal struggles and outside threats. On top of that, it's up to the player to guide AJ in the post-apocalyptic world.

Be warned: with all episodes of The Final Season now released, this article will have spoilers, and some may be unmarked. Proceed at your own discretion.
Advertisement: