Would Hurt a Child 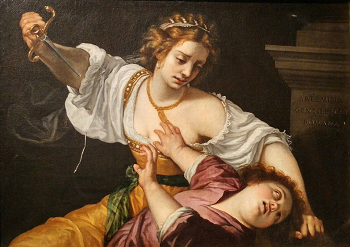 "Cursed children of a hateful mother—may you die with your father and his house!"
"I don't give a shit HOW old you are. Maybe think before you pick a fight next time."
— Sol Badguy (to an unconscious May), Guilty Gear Xrd
Advertisement:

In fiction and in the media, both heroes and villains often agree on one thing: they Wouldn't Hurt a Child.

But sometimes, some people just don't agree with that. Or just don't care. And, they do hurt children, sometimes even kill them, in defiance of the Improbable Infant Survival. Indeed, the act of harming a child usually comes off as the ultimate act of villainy.

This trope is almost always a Kick the Dog moment. Hence, the presence of Would Hurt A Child is often telltale of a Crapsack World or at least a Darker and Edgier series. However, it is surprisingly easy to subvert this trope simply by using Kids Are Cruel (the flip side of Children Are Innocent) and combining it with Pay Evil unto Evil. Does a soldier shooting a child soldier still seem like an ultimate villain? And want to go all the way? Make the children creepy or, even better, make them Enfant Terribles and, this time, hurting said children will look much less as a Moral Event Horizon crossing, even though there will always be some Moral Guardians or Papa Wolf / Mama Bear to complain. This may also be done by a Complete Monster to establish that even a villain has lines they won't dare cross. Naturally, the Friend to All Children sees this type of character as a mortal enemy, with an exception sometimes for religious figures in some cases.

In Western works, this trope is rare and almost always done off-panel when played straight (read: when the violence towards the child isn't being stopped in the nick of time and causes actual damage) largely due to broadcast standards; it's a little more common in literature but still not very much so. In Japanese fiction, child brutality can be more common but is often framed in a very specific way (again, to conform to their S&P) and has actually faded somewhat in the new millenium over content concerns.

Important Note: This trope is about adults physically hurting children, or deliberately placing them in life-threatening situations, fatally or not. The following are not examples: psychological/verbal abuse (very common but not that trope), abduction (only applies if the child dies or gets effectively hurt), depriving a child of food (that's Denied Food as Punishment and only counts as this trope if taken to the point where the child is at risk of serious harm from lack of food), child on child violence (unless adults are forcing the children to hurt each other, that's Kids Are Cruel), exploitation for profit by the parents if they aren't hurt (that is Financial Abuse). Violence to teenagers, with the exception of some of those in their early teens, isn't an example either since teenagers are physically stronger than children and lack the "completely defenseless" element, especially if Teens Are Monsters. However, teenagers harming children applies.

There is also an interesting Double Standard when it comes to characters applying for this trope, since they are almost Always Male. Rarely are women described as being physically violent to children. Even rarer are the instances when they actually kill them. Indeed, killing children is among the few things that permanently prevent a woman from a convenient High-Heel–Face Turn. Extra points if the killing is done directly and at the woman's hands (i.e. stabbing, strangling etc...). Compare Pædo Hunt, another child abuse trope where female perpetrators are similarly unheard of.

A Sub-Trope of Kick the Dog. Burn the Orphanage is a particular form of this. See also Child Hater, who hates kids but isn't necessarily physically abusive and Nice Job Breaking It, Herod!, which is often an extreme version. If they're not stopped in time by the heroes, this overlaps with Death of a Child. Contrast Improbable Infant Survival and Wouldn't Hurt a Child. Compare Kids Are Cruel, Children Are Innocent. Related to Eats Babies and Child Eater. Usually applies to the Sadist Teacher. If a villain who is quite capable of bothering adults prefers to spend his time as an antagonist for kids or teenagers, it's fair to say Pick on Someone Your Own Size. For the role-reversed example of this trope, see Double Standard: Violence, Child on Adult, in which case it's a child physically harming an adult for comedic effect.

Offing the Offspring would also apply if the one doing the hurt is the parent of the child, and death of the latter results.