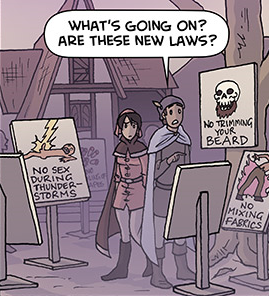 "Whereas the turnip represents the very best qualities to be found in society, and: whereas it is of fine texture, particularly when boiled, and has been proven to remedy all ailments known to Man when consumed:
"Therefore I, [ruler's name], decree that the turnip shall henceforth be used as currency throughout the realm, taking the place of gold, silver or any other precious metal. These shall instead be turned over to the Crown for immediate disposal."
— The Turnip Act (passed by a Lunatic ruler), Crusader Kings II
Advertisement:

By royal decree, all citizens of the realm must make their clothing out of taffy and stand on their heads three times a day! Mondays have been outlawed! The color puce is an abomination!

In other words, this is when the lawmakers have gone insane. The usual result of your more literal cases of With Great Power Comes Great Insanity. Might have been written by The Caligula, or put up by the Hanging Judge in a Kangaroo Court. Often Played for Laughs — and is usually Black Comedy even in more serious examples.

Loony laws can also arise from "poison pill" political tactics. Opponents of a sane proposal may add a loony provision in hope of getting the main proposal defeated, but if the proposal passes despite such machinations, the loony provision also becomes law.

Sometimes the law may not have been Loony in and of itself when originally implemented (a law that prevents animal cruelty, for example), but the fact that society changes and Technology Marches On makes any attempt at continuing to enforce the law seem insane (the animal the law was supposed to protect is long extinct, but the law has not been repealed or changed to account for it).

May involve a lot of Felony Misdemeanor or Disproportionate Retribution. If the law permits deeds that aren't just wacky but downright wrong, that’s Legalized Evil.