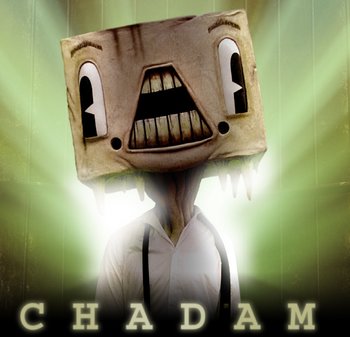 Chadam is a 2010 Web Animation series created by artist Alex Paradee, based on characters he had created for The Used, and broadcast online by Warner Bros.. The series was highly experimental, animating the characters with the latest video-game technology, the Unreal Engine 3

. There are ten episodes in total, as well as a behind-the-scenes special.

The city of Vulture was built on the imagination of its residents, but the rise of strange monsters known as Pallids had forced everyone to move into the inner part of the city, and struggle daily against the growing threat. The reclusive Chadam, who somehow didn't know what was going on, gets pressured by his friend Sandy into using his innate magical ability to save the day.

The series can be watched here

Chadam, alone in his room, starts getting disturbed by someone knocking on his door.

Chadam, alone in his room, starts getting disturbed by someone knocking on his door.