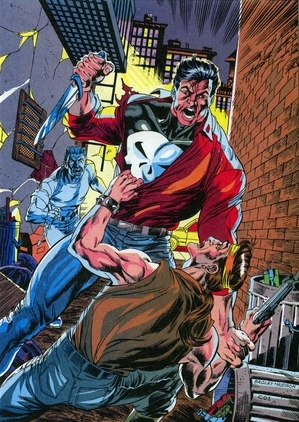 "I think there's no good in the filth that I put down, that's what I think."
Wardaddy: [in okay-ish German] Mayor, was he [pointing at an SS officer] the one hanging the kids?
Mayor: [in German] Yes.
Wardaddy: Hey, Abe. [casually points] Shoot that guy.
— Fury
Advertisement:

The dark, logical corollary to The Golden Rule.

So the character descends upon the settlement, burns their buildings, kills the inhabitants, takes their money and resources, and leaves, pleased that now he'll be able to buy that shiny new whatever-he-was-wanting.

Is this the new Big Bad? No! It's The Hero! ... oh wait, did you know that it was a settlement of demon worshipping cultists that supports their activities with banditry? A more Wretched Hive of arsonists, murderers, and jaywalkers never blemished a countryside.

Welcome to a special kind of morality where otherwise evil actions are considered okay because the victims deserved it and Revenge Is Sweet. Like all tropes, this can be played with any number of ways. It can be played straight, defied, deconstructed, or left disquietingly gray depending on the author. This one's very common with Revenge stories in general, since revenge at its core is a viciously personal case of Paying Evil Unto Evil, and when one is broken to the core by the suffering brought by the evil, even a desperate Revenge by Proxy becomes justifiable (or at least it will seem that way to the one taking revenge). Alternatively, the hero may use such tactics as part of a deliberate and calculated strategy to break the villains' morale.

Expect an extra heavy Villain Ball complete with kicking dogs by the Asshole Victim if the author especially wants you to know it's okay. The plot often uses this with a "people whom the law let get away" Karma Houdini combination. The villain may call out a "Not So Different" Remark to the "hero" as a final insult.

This sort of character often gains an Inspector Javert opponent, whose rightness depends from case to case.

It is also a common and effective way to give a Sympathetic P.O.V. to an Anti-Hero in works with Black-and-Gray Morality. In darker Crime and Punishment Series, this is often the reaction of the police department to Cop Killers (to the point of becoming Police Brutality).

And should a person have trouble doing this on their own, they can always ask for a helping hand.

If a victim of evil, or a Badass Pacifist, chooses not to Pay Evil Unto Evil, they may decide to Turn the Other Cheek. How effective either response is will depend on where the work falls on the Sliding Scale of Idealism Versus Cynicism.

Compare with Strike Me Down with All of Your Hatred!, in which the villain deliberately goads the hero into doing the same terrible things he did to him. Usually as a plot to get them to sink to their level.

Contrast with If You Kill Him, You Will Be Just Like Him!, The Farmer and the Viper, and Kick the Son of a Bitch (when the victim in question isn't recognized by the person victimizing them for the bad things they've done; the lines may be blurred in cases where the person inflicting harm was, at the core, just looking for someone to hurt and decided to use the victim's scumminess as an excuse to harm them). Depending on the depiction, Hell may also serve as an extreme example, where those who do evil are punished forever with various torments you certainly wouldn't call good. May overlap with Disproportionate Retribution. See Revenge Is Not Justice which is a possible deconstruction of this trope in which the hero is held accountable for victimizing the wrongdoer.

In real life, the sort of thinking behind this trope is called "retributive justice