Literature / The Three Little Men in the Wood 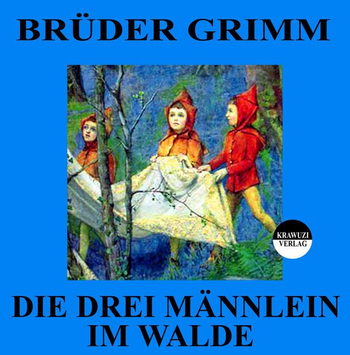 "The Three Little Men in the Wood" (German: Die drei Männlein im Walde) is a German Fairy Tale collected by The Brothers Grimm and published in their Children and Household's Tales (Kinder- und Hausmärchen) collection. It is the number 13 tale.

A widow with a daughter persuaded the daughter of a widower to persuade her father to marry the widow. Then she oppressed her stepdaughter. Finally, she sent her into the winter woods with orders to gather strawberries. There, she met three little men, who asked what had happened to her, asked her to share her food, and then asked her to sweep off their back step. When she went, they decided she would grow more beautiful every day, have gold fall from her mouth when she spoke, and marry a king. Also, while she swept, she found strawberries.

Her arrogant stepsister insisted on going after the strawberries. She was rude to the little men and refused to share her food. So they cursed her to grow uglier, have toads drop from her mouth, and die a miserable death. She never found strawberries.

The furious stepmother sent her stepdaughter to rinse yarn in the frozen river. A king saw her and took her off to marry her. They had a baby. The stepmother and her daughter came to the castle, threw the queen out of the window and into a stream, and put the daughter in her place. The stepmother refused to let the king see her, and blamed the toads on her illness.

A scullion, however, saw a duck swim up and ask what happened in the castle. Then she became a woman again and nursed the baby. On her third visit, she told the scullion to tell the king to swing his sword three times over her while on the threshold. This brought her back to life.

At the baby's christening, the king asked the stepmother what punishment should be inflicted on someone who threw someone in the water. She said, "The wretch deserves nothing better than to be taken and put in a barrel stuck full of nails, and rolled down hill into the water." So the king had it done to her and her daughter.

Compare with "Brother and Sister", "Mother Holle", "St. Joseph in the Forest", and Russian tale "The White Duck".

In the Aarne–Thompson–Uther Index, it is a Type 403B, "The Black and the White Bride" and 480, "The Kind and the Unkind Girls".