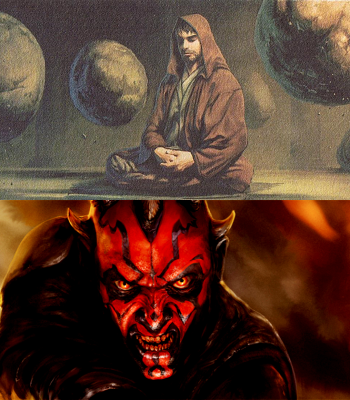 In Speculative Fiction, whenever there are two innate forces at work (usually Black-and-White Morality or Order Versus Chaos), the "Light" side (that is, the heroic side) will be transcendent, calm, and rational; the "Dark" side (the antagonistic side) will be passionate, impulsive and chaotic. Rarely are the two inverted, with the good side being the emotional one and the evil side being the enlightened.

Related to Villains Act, Heroes React, although that particular trope is more about how the events of the story are motivated by the villain's actions. Also, do not confuse with Ambition Is Evil, in which you can tell the good guys from the bad guys because the bad guys are the ones who want to change the Status Quo. This trope is specifically about when there are two metaphysical forces in opposition and one of them motivates through passion and emotion and the other through peace and enlightenment.

This trope is more common in Eastern works than Western ones thanks to the influence of Buddhism, where passion is linked to obsession and therefore, a temptation to be avoided. Meanwhile in Western works, a lack of passion tends to be linked to a lack of value for life and as such, a villainous trait.

Tends to be a common trait for a Strawman Emotional. May invoke a Superpowered Evil Side and, inversely, a Helpless Good Side. This trope can also be considered the opposite of Order Is Not Good because order (as in, discipline and self-restraint) is important for keeping passion in check and prevent going to The Dark Side.

Compare Emotions vs. Stoicism and Harmony Versus Discipline. Compare also The Power of Apathy, an inverse of this which is often comedic and based around apathy's relationship with defiance.