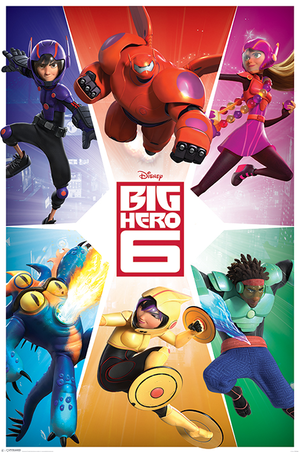 Big Hero 6 is the 54th Disney Animated Canon film, inspired by the Marvel Comics superhero team of the same name created by Man of Action, making it the first Disney animated film featuring Marvel characters following the company buying the comics publisher in 2009.note However, for all intents and purposes, Big Hero 6 is considered to be a Disney rather than Marvel property. Marvel's higher-ups served as creative consultants for the film's production, but had no involvement in any subsequent BH6 projects. Yes, after years of dabbling in fantasy, mythology, and even video games, a superhero film has finally entered the animated canon.

In fictional San Fransokyo (a portmanteau of San Francisco and Tokyo in form as well as name), robotics prodigy brothers Hiro and Tadashi Hamada live with their aunt over her cafe/bakery. Tadashi attends the prestigious university San Fransokyo Tech, and wants his brother, who spends his time hustling illegal bot-fighting, to do the same. Tadashi invents a huggable learning robot named Baymax for assisting in healthcare, and hopes it can be used in hospitals in the future, but a sad fate stops him from realizing that dream. When a threat to the city arises caused by the mysterious criminal Yokai, Hiro upgrades Baymax into a flying fighting machine, and recruits Tadashi's four best friends to form the ultimate superhero team to stop him.

Big Hero 6 was released in theaters on November 7th, 2014, preceded by the animated short Feast. It received an Academy Award for Best Animated Feature Film.

A television series taking place immediately after the film premiered in November 2017. The show is headed by Mark McCorkle and Bob Schooley, who are best known as the creators of Kim Possible. A three-issue comic book series from IDW Publishing based on the animated series was released in 2019 after several delays. A post-film version of San Fransokyo was featured as a world in Kingdom Hearts III.

"Are you satisfied with your tropes?"

open/close all folders
Tropes # to C
Tropes D to F
Trope G to L
Tropes M to R
Tropes S to Z
"I am satisfied with my care."
Feedback

Aunt Cass lets her nephews have it for getting arrested.

Aunt Cass lets her nephews have it for getting arrested.