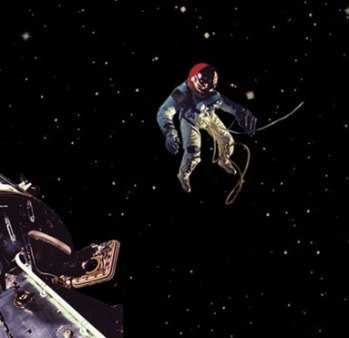 Nothing to do now but count the stars.
"It's cold outside
There's no kind of atmosphere
I'm all alone
More or less..."
— Ending theme, Red Dwarf
Advertisement:

So you're watching a good old Space Opera or your favorite Cyberpunk TV series. There's been a grand battle and within all the excitement, you forget that in an intergalactic space war so big there must have been at least a few casualties. It is of course, the writers' jobs to remind of this eventually so as to add to the drama whilst slowing the pace a little.

Next you, the casual viewer, will be shown images of the debris left behind in the battle. It will only be a matter of time before you're shown a body (or parts thereof) floating within the wreckage.

This is Dramatic Space Drifting.

Common in Science Fiction, this is when a spaceship blows up in a battle and relatively important characters are visible drifting through the debris, usually with all body parts intact. This is a trope based mostly in aesthetics rather than adherence to scientific fact, though a lot of modern depictions manage to accurately portray the effects of decompression on human beings (namely that a person does not explode nor freeze, instead suffocating in vacuum). Characters are usually dead, thus emphasizing the tragic consequences of the battle at a human level, but there are occasions in which characters are still alive and such occasions can either have the same effect or achieve a more comedic one.

See also Thrown Out the Airlock. Improvised Microgravity Maneuvering may be used to escape this situation.

No relation at all to Multi-Track Drifting.