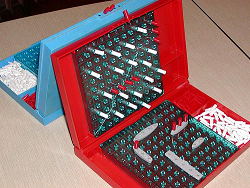 You sank my ... oh, wait, that was only my submarine.
Advertisement:

This is originally a board game for two players, though it can be played with pencil-and-paper and has been adapted to computers. The classic Milton Bradley set-up has two identical plastic half-boards, one red, one blue. Each half has two 10-by-10 sections: one flat one with peg holes where you place the ships, and a vertical section with peg holes which has the dual purpose of marking where you fire your shots and hiding where your ships are from the other player. Both grids are labeled with letters in one direction and numbers in the other, A to J and 1 to 10 respectively.

The most common setup gives each player one two-peg destroyer (formerly a patrol boat), one three-peg submarine, one three-peg cruiser (formerly the destroyer), one four-peg battleship, and one five-peg aircraft carrier, which are arranged on the flat board in an arrangement of the player's choosing. Each turn, one player says where he's firing his shot; the other declares whether they miss or hit (you can place pegs in the ships when they hit), whether a ship is sunk, and the type of ship. The last player with at least one ship on the board wins. One game variant allows the player to fire as many shots as they have ships still afloat.

Received a live-action film adaptation in 2012. With aliens and Liam Neeson. There have been a number of video game adaptations as well, from the NES to modern PCs.

This board game has examples of:

This board game appears in the following media: