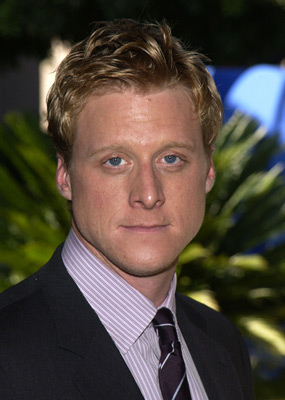 "I was a real ham as a child. I'd insist on dressing up as a cowboy whenever the family went out for dinner. In high school, I was a menace. I'd fake nose bleeds and fainting spells to panic my teachers."
Advertisement:

Alan Wray Tudyk (born March 16, 1971) is an American actor and voice actor known for his roles as Hoban "Wash" Washburne in the space western television series Firefly and movie Serenity and Wat in A Knight's Tale. He co-stared on the ABC sitcom Suburgatory also had a starring role in the film 42 as Ben Chapman and voiced significant roles in the Disney animated films Wreck-It Ralph, Frozen, and Big Hero 6. He's appeared in every Disney film since Wreck-It Ralph, in fact, and commonly voices characters who play the role of the Red Herring.

Primarily known for his comedic roles, he's made more of a mark with villainous roles in recent years. A good example would be the psychotic serial killer Carl "Alpha" Craft from Dollhouse, where Tudyk subverted the Wash persona that most Whedon fans best knew him for.

"I am a leaf on the wind — watch how I soar."
Feedback