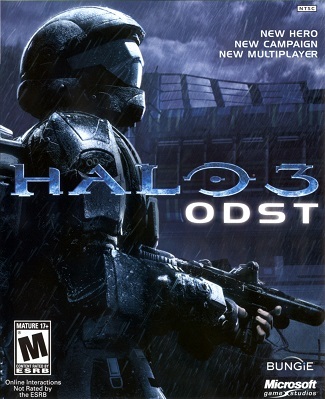 "Now's one of those times it pays to be the strong, silent type..."
The year is 2552.
Humanity is at war with the alien alliance known as "The Covenant".
We are losing.
— Opening Crawl
Advertisement:

Halo 3: ODST is a Halo Gaiden Game released on September 22, 2009 as a stand-alone expansion of Halo 3. Chronologically, ODST is concurrent with Halo 2 - specifically, the game starts right at the end of Halo 2's "Metropolis" level.

After nearly three decades of war, the alien theocracy known as the Covenant has discovered the location of Earth. Alien ships swarm the planet to enact their campaign of extermination, and to uncover a hidden relic sacred to their religion. Humanity's greatest hero, the SPARTAN-II Super Soldier John-117, has followed the enemy flagship through a portal to an unknown destination in an attempt to thwart their sinister designs for humanity. But back on Earth, the fight continues without him.

In the African mega-city of New Mombasa, UNSC marines and local police wage a desperate defense in an attempt to evacuate civilians and deny the Covenant access to key military facilities. You are an Orbital Drop Shock Trooper, one of the most elite members of humanity's military, freshly recruited into a squad assigned to a Naval Intelligence agent with a secret mission in the city. Separated from your squad by a failed drop that knocked you unconscious, you must now search the ruined city for their whereabouts, and for a means of escape...

The gameplay is largely a throwback to Halo: Combat Evolved, with the return of the Health Meter, slowly-recharging "stamina" instead of shields, no Dual Wielding, and a pistol that's actually useful. Uniquely for the series, the campaign is organized around a relatively open-world Hub Level, where it is up to the player to figure out which route they should take to their next objective, which is usually a clue about what happened to the rest of the squad; each time a clue is discovered, you will play through a flashback mission where you take on the role of one of your squadmates.

The game also included a second disc that was comprised of the Halo 3 multiplayer (no campaign) with all of the downloadable maps (including three that wouldn't be available otherwise for half a year after ODST's release). In addition, it featured a new multiplayer mode called "Firefight" where you battled endless waves of Covenant coming after you.

Because of the issues that polluted the online modes of Halo: The Master Chief Collection on Xbox One, 343 Industries promised that anyone who had played the game between its launch and December 18, 2014 would be eligible to download a full HD remaster of the Halo 3: ODST campaign at no charge. The remastered campaign was released on May 30, 2015note Unfortunately, this meant no Firefight multiplayer. For ineligible players, the campaign can be purchased as Downloadable Content for The Master Chief Collection at around six dollars. As of September 22, 2020, Halo 3: ODST has been made available on PC. Alongside the PC release came the return of the ODST version of Firefight.

In April 2022 the Master Chief Collection's version of the game's Firefight mode recierved a massive overhaul; introducing new waves of enemies never seen in the game, including sentinels and Elites, new weapons (or more accurately, new weapons backported from Halo 3) being available to use such as Energy Swords and Battle Rifles, a new "Boon" system which provides the fireteam special bonuses per round (ranging from weapon deliveries, the stocking of gun racks across the map, to AI controlled allied Special Operation Elites dropping from orbit to assist the player), and the biggest addition, a much-requested feature from fans; Floodfight, a new game mode that introduces a heavily expanded and overhauled Flood to Firefight for the first time.

Tropers! We are green, and very, very mean!