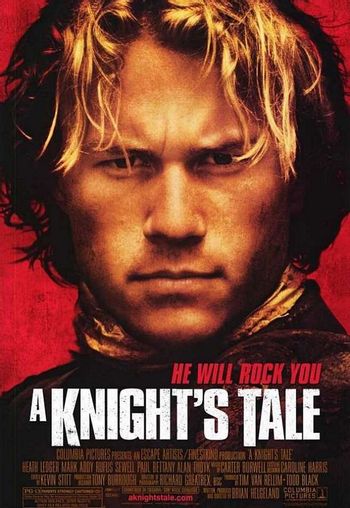 The film plays like a combination sports movie and romantic comedy, except that the sport is jousting and the setting is The Late Middle Ages (specifically The Hundred Years War). Our hero William is a simple squire who, with the help of some lowborn buddies, attempts to make his mark by posing as a noble knight, becoming Europe's finest jousting sensation and winning the heart of a fair maiden.

The film is notable for its gleeful embrace of Anachronism Stew, featuring 14th-century courtiers dancing to David Bowie and peasants doing the stomp-stomp-clap cadence from "We Will Rock You."

William, having become a knight, returns home to his blind father.

William, having become a knight, returns home to his blind father.