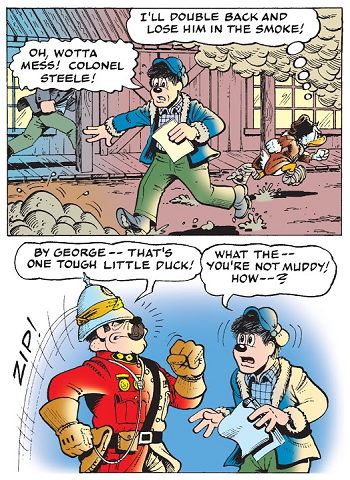 The conspicuous lack of grime, dirt, or bruises on actors, especially those in action sequences. There is an inherent suggestion of grueling badassness to completely cover a character in sweat and grime to show that he's really gone through the wringer. This might be a remnant of older special effects, which lacked CG but were very fond of various fluids and chemicals being waded through and thrown around.

Particularly noticeable on female characters. The human antithesis to this is probably Bruce Willis, who by the end of his movies is drenched in about five pints of grime, sweat and blood, mostly his own. Sigourney Weaver's stint as Ripley in Alien was probably the first major female exception.

One practical reason is that film and television scenes are rarely shot in chronological order, requiring the director to carefully keep track of which scenes are supposed to show which markings. The easiest solution is to avoid the issue by not having any stains in the first place.

See also Beauty Is Never Tarnished and Bullet-Proof Fashion Plate. May not protect against Gunge.

Has nothing to do with Elemental Barrier.