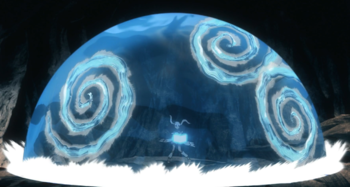 A Sub-Trope of Instant Armor and Sister Trope of Elemental Armor, this trope utilizes elemental forces as a form of (instantaneous) protection in a shape of a usually spherical barrier that covers the user. It can be a ball of flame, sand, lightning, or any elemental manifestation.

Characters who use this trope are a combination of Barrier Warrior and Elemental Powers. This trope is the reason why the Barrier Change Boss exists.

See Instant Armor for worn armor that appears instantaneously and Elemental Armor for an elemental variation of the former.

The Ice Vellumental encases itself in ice.

The Ice Vellumental encases itself in ice.