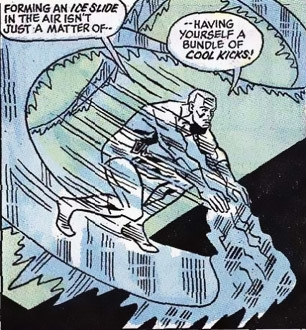 — but also having a tanker truck full of water follow you around!
"Unbelievable for him to be able to use such a water jutsu where there is no water!"
— ANBU Captain, Naruto
Advertisement:

When users of Elemental Powers need to kick ass and take names, they can't always count on there being enough of their element of choice around to properly fight.

At its core, Elemental Baggage belongs to the Acceptable Breaks from Reality brought about by the Rule of Cool. In order to make the action more interesting, the author expects that the viewers will not concern themselves with whether there's enough water around for the empowered character to flood the room, as long as it makes for flashy combat scenes, and maybe just assume they got it from Hammerspace.

This violation of Equivalent Exchange is less noticeable for manipulators of more volatile elements such as air (which is present in large enough quantities in pretty much every setting), fire (although someone is bound to ask where all those calories come from, which is often Hand Waved by having fire users be Big Eaters) or lightning (where one is usually more distracted by the character's Psycho Electro qualities). People with the ability to control earth and especially water using this trope tend to be much clearer examples of Artistic License and Rule of Cool being employed, depending on how much of the element is available. Or it may otherwise be explained away with factors such as high amounts of dust or humidity.

If after using this, the writers then decide to include a scene where the elemental user is explicitly at a disadvantage because they can't find a large enough source of their element to control, we have a case of Holding Back the Phlebotinum.

Compare This Looks Like a Job for Aquaman if the power is more difficult to get into use.

In many fantasy settings, Functional Magic will often allow the elemental ability to be simply created out of nothing, requiring no source to function. Otherwise only a small amount of the element may be needed to power the spell, or some other Power Source or component may be used. It may also allow the user to draw elements from distant sources or even other planes of existence.

Related to No Conservation of Energy, Shapeshifter Baggage, and the Hyperspace Arsenal. Often implied for Snow Means Cold.

This item is available from the Trope Co. catalog.