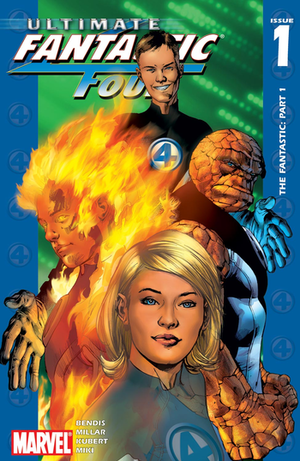 Ultimate Fantastic Four was a reimagining of the classic superhero team for Marvel Comics Ultimate Marvel line. It saw Reed Richards, Sue and her brother Johnny, as well as Ben Grimm, reimagined as young adults housed in the Baxter Building after an experiment in Inter-Dimensional Teleportation gives them all special abilities. Reed Richards is a young scientist, part of a government think-tank, charged with creating new technologies for the spy agency S.H.I.E.L.D.. An unsuccessful attempt at teleportation transforms the physical forms of himself, the children of the think tank director, his best friend Benn Grimm, as well as his colleague Victor Van Damme, into beings that are no longer human.

Now a team of superheroes, the Fantastic Four spend their days fighting off intergalactic and inter-dimensional threats, many of which come about due to Reed's experiments, while they're hidden from the public eye, forced to live out their days in the Baxter Building under the eye of Dr. Franklin Storm.

The series lasted for sixty issues, from February, 2004 to April, 2009. After Ultimatum, the series was cancelled and the Four broke up: Sue continued her research at the Baxter Building, Ben became a test pilot for S.H.I.E.L.D., Johnny moved in with Spider-Man, and Reed moved back in with his family. In the "Ultimate Doomsday" trilogy of miniseries, it was discovered that Reed had become disgruntled, turning villainous, wanting to change the world by force. Meanwhile, Ben has shed his stone skin, becoming physically human again but having unknown energy powers. Johnny later became a member of the Ultimate X-Men.

A new volume was launched in 2014, following the Cataclysm crossover. Dubbed Ultimate FF (as in Future Foundation, not Fantastic Four), the new series starred the Invisible Woman, Iron Man, The Falcon, Machine Man, Phil Coulson and Doctor Doom. After the disappointing sales of the first two issues, Marvel cancelled the book, effectively turning it into a 6 part mini-series.