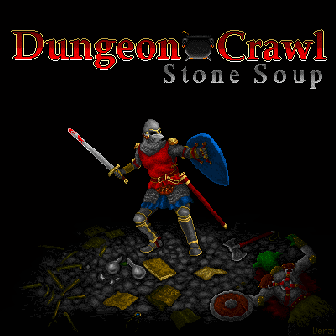 That's what's so great about Crawl: every time, you don't even have rage at the chance of the heavens to sustain you; you know, with a cold certainty something like that of a priest who has lost his faith in God, that your death was caused by none other than yourself, and that a better man could have avoided it.
— <nrook>, as quoted by the Dungeon Crawl knowledge bots under "fair."
Advertisement:

Dungeon Crawl (called Dungeon Crawl Stone Soup in full, or Crawl or DCSS for short) is an open-source roguelike game, based on the late 1990s roguelike Linley's Dungeon Crawl. Along with NetHack, Angband, ADOM, and ToME, it is considered one of the major modern roguelikes, with a large fanbase and active player community and devteam.

Crawl sets itself apart from other roguelikes with a number of distinguishing features:

In terms of flavor, the game has a similar medieval fantasy setting to most roguelikes, having been inspired by most of them: elves, dwarves, and orcs all make an appearance; weapons are the typical array of medieval blades, sticks, and bows; magical wands, potions, and scrolls can be found everywhere, and of course, there are many, many, many monsters waiting to kill you. The plot is minimal: the player's task is to go to the bottom of the dungeon, nab the Orb of Zot, and escape.

or play it online