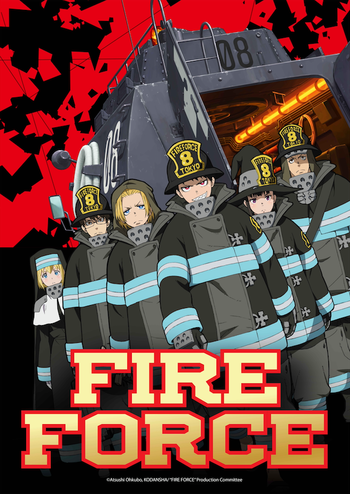 Fighting Fire with Fire.
"Causes of death are many and varied. Old age, illness, suicide. Out of that long morbid list, there's one end that people fear above all others: Death by fire."
— Captain Akitaru Ōbi

The year is Solar Calendar 198. The risk of death runs high, but among the usual deadly fare, one grisly method of demise stands out the most: Death by fire.

Known as the "Spontaneous Human Combustion", many people now face the risk of turning into "Infernals", rampaging beasts with no control over themselves and in a state of burning pain. It's a completely random and extremely fatal process, with nearly no way to stop it. To combat this, the world established "Special Fire Forces" - groups with members who can control flames enough to extinguish the Infernals and put the rampaging souls to rest. Some officers can control fire, while others can create fire in unique ways.

Shinra Kusakabe is one such person. Armed with the power of Devil's footprints and a fiendish smile, he aims to become a hero and uncover the secret of the Infernals to better the world as a member of Special Fire Force Company 8. However, Company 8 exists as Internal Affairs to investigate the secrets and lies of many groups across The Empire. Meaning Shinra and his allies will have to journey across the nation and battle criminals, cults and other officers to uncover the truth about the Infernals. Especially as Shinra is also investigating the fire that killed his family 12 years ago...

Fire Force (Enen no Shouboutai, lit. "Fire Brigade of Flames") is a manga started in 2015 by Atsushi Ohkubo of Soul Eater fame, which was brought over to English audiences by Kodansha in 2016. An anime adaptation by David Production was announced in November 2018, with Funimation to stream the show abroad and serve as co-producers. The series began airing July 5, 2019 on Tokyo Broadcasting System, and began airing on United States television via Toonami on July 27th.

In May 2020, Ohkubo announced that Fire Force will be his last official work before his retirement.