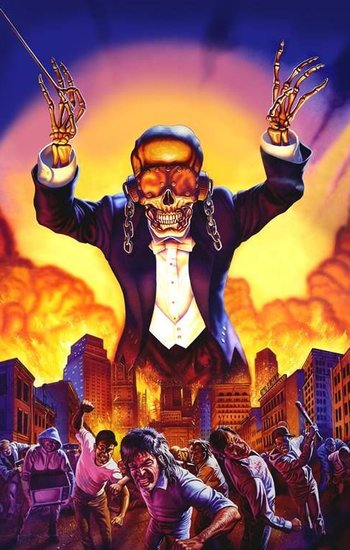 A Concerto of Chaos. Courtesy of Megadeth
"He thinks that it is music. The music of the battlefield! The Major...! He's conducting it! The battle is his symphony...and we are his instruments. Great, howling instruments, wailing his cacophonous thoughts! How can anything stand against him?!"
— The Doktor, Hellsing

Something awful is happening. The world might be ending. There's maiming and killing afoot. Screaming and cursing, cries for mercy, the sound of blood being spilled, gunfire, explosions. Faces twisted with fear, rage, and bloodlust. Bodies hitting the ground. It's a horrific situation.

But then, you see someone close or far away waving their arms around like they're signaling an orchestra. Often they are seen waving madly with a crooked smile or calm and serene as if they've found bliss. The violence and madness around is like music and the ones committing it are their instruments. In some cases, they are simply playing an instrument while others are fighting and killing to their whimsical tune. They are the ones conducting the carnage.

Likely to overlap with While Rome Burns or Dancing in the Ruins as the character in question indulges in their behavior in response to the chaos around them. Might overlap with the perpetrator being Wicked Cultured if there is classical music playing in the background/ brought up by the villain. If the world itself is crumbing, Watch the World Die can overlap, but the character is doing certainly more than just watching.