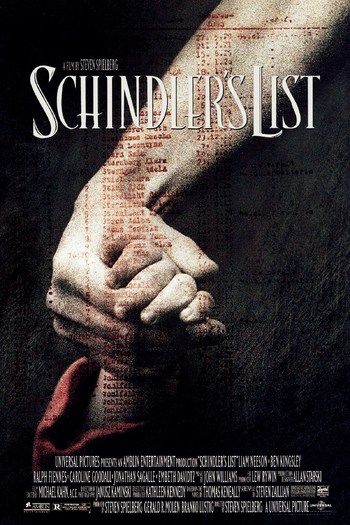 "Whoever saves one life, saves the world entire."
"I knew the people who worked for me... When you know people, you have to behave toward them like human beings."
— Oskar Schindler (not a line in the movie; attributed to the man himself)
Advertisement:

Schindler's List is a 1993 film directed by Steven Spielberg, produced by Spielberg, Gerald R. Molen, and Branko Lustig (a survivor of Auschwitz), and written by Steven Zaillian. The film features music composed by John Williams, and it was shot almost entirely in black and white.

The film is based on the book Schindler's Ark by Australian author Thomas Keneally, which was based on the actions of Oskar Schindler (portrayed by Liam Neeson in the film). Allegedly, Schindler's wife once said that he did nothing remarkable before or after the war—World War II, that is. He was a mediocre businessman in Nazi-era Germany who, while trying to profit from the German annexation of Poland, ended up running a factory that "employed" enslaved Polish Jews as the workforce. As the Nazis began exterminating the Jews and other "undesirable" groups, Schindler saved as many as he could by getting them classified as workers essential to the war effort and assigned to his factory.

In sharp contrast to Hugo Boss, Siemens, Ford, and other firms that profited from slave labor (i.e. every major company in wartime Germany), Schindler actively endeavoured to keep his workforce alive and even preserve 'unskilled' workers who were not actually useful to him. The film's title comes from the "lists" he kept of skilled workers that he could not afford to lose—those lists eventually grew to include every one of his workers, their families, and the investors who had helped him buy the factory. At great personal risk and financial cost (he bankrupted himself), Schindler saved more than a thousand people from being either worked to death as slaves rented from the SS Main Business Directorate by German companies or killed as concentration camp inmates.

open/close all folders
A-H
I-Z
There are fewer than four thousand Jews left alive in Poland today. There are more than six thousand descendants of the Schindler Jews.
— from the epilogue
Feedback

Amon Goeth killing 25 prisoners as retaliation for one of them escaping.

Amon Goeth killing 25 prisoners as retaliation for one of them escaping.