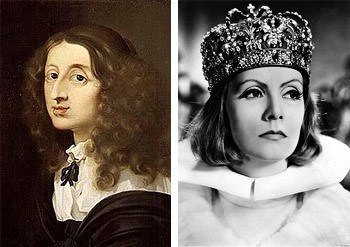 The real Queen Christina of Sweden, and Greta Garbo playing her in the 1933 film.
"And needless to say, [John Smith] was a short, portly brown-head — Not the golden-haired Adonis we see before us in the movie."
— The Nostalgia Chick on Pocahontas
Advertisement:

In a nutshell, this is the tendency of popular entertainment to make Historical Domain Characters look more handsome or beautiful than they actually were (or are reported to have been by the sources of their time), and/or to fit their looks to the beauty standard of the culture the work is made for.

Even when sources state that someone was attractive, this was of course according to the standards of their contemporaries. Certain characteristics, such as clear skin, shiny hair and a certain evenness of the face are universally liked, as they show health. The assessment of all the rest (body type, skin color, facial features) though, varies with the vogue of the time and place. While some of the clothing people used to wear is seen as Gorgeous Period Dress, other fashion and hairstyle choices were also not exactly in line with current tastes. Body modification, ranging from make-up to scarification, varies wildly among cultures and their history and shows how truly polarising ideas of beauty can be.

A visual Woolseyism. A historical figure regarded as attractive by contemporaries is depicted as attractive according to modern standards, preventing their good looks from becoming Informed Attractiveness.

Medieval Morons is as unrealistic as The Beautiful Elite, but the population of former times certainly lacked the comforts of modern technology and therefore, unless stated otherwise, it is safe to assume that the "hero" of one's story carried the marks of a harsh life without proper medicine and full of dangers and hard physical labour; and no toothpaste either - though it was only the advent of (cane) sugar that really led to bad teeth en masse.note Incidentally, the top producer, exporter, and consumer of cane sugar for a long time was the British Empire, via its Caribbean island plantations; this is why we also have the British Teeth trope.

One would think the advent of photography might curb this practice, but in the end, we all just love looking at attractive people too much to let little things such as actual history keep us from imagining them as gorgeous. This trope is, of course, one of the oldest ones there is. When no one knows what the historical person really looked like, all bets are off.

There are several reasons for this trope. Actors and actresses are in a profession where good looks are an asset and they are selected for that, just as Athletes are in better shape than the norm, lawyers and politicians are better at public speaking, etc. So the group playing the part already contains a higher portion of good-looking people.

Moreover, modern actors take much better care of their appearance than most people and have a whole staff working 24/7 to help them look good. If the historical person they're portraying lacked the time or money to do this — or had the means, but simply didn't care enough — then the actor will naturally look more healthy and/or well-groomed than the real person would have.