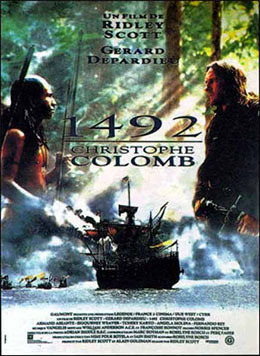 1492: Conquest of Paradise is a 1992 film, celebrating the 500th anniversary of the official discovery of the American continent by Europeans and taking the form of a Biopic of Christopher Columbus. It was directed by Ridley Scott, stars Gérard Depardieu as Christopher Columbus and Sigourney Weaver as Queen Isabella I of Castile. Vangelis composed the soundtrack.

The movie starts in 1485, when Columbus had already been refused once by the King of Portugal the means to try crossing the Atlantic Ocean, sailing to the West. He turns to Castile and travel to Granada to meet the Queen, who, after another refusal, finally allows him to sail away, on August 1492.

What happened then... is history.

1492: Conquest of Paradise provides examples of: