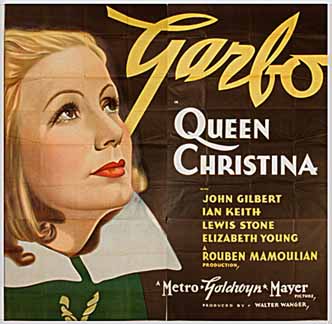 Queen Christina is a 1933 Pre-Code Hollywood film starring Greta Garbo as the eponymous queen of Sweden who ruled during the 17th century. Christina was very much a proto-feminist figure in many ways; not only was she an authoritative ruler, but she also dressed in men's clothes and had a generally androgynous manner. The movie plays into Garbo's ability to exploit those qualities while wrapping the whole thing in a conventional love story between Christina and her Spanish envoy (John Gilbert), where she must ultimately make the choice between duty and love.

Garbo and John Gilbert had been lovers for a while in The Roaring '20s, and had been co-stars in hit films like Flesh and the Devil back when Gilbert was the biggest romantic leading man in Hollywood. Unfortunately for Gilbert, his career went down the crapper when talkies came in. Garbo insisted on Gilbert as her leading man in this film in an effort to revive Gilbert's career. It didn't work, and Gilbert made only one more movie, The Captain Hates the Sea, before drinking himself to death in 1936.