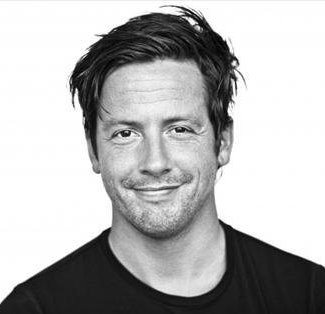 Look, he's not wearing a suit.
"My dad used to say all the time, “You want something, you can do it.” If you want it, believe in it. Have the chops, persistence, and strength. It can be a rough ride but it can happen."
Advertisement:

Ross McCall (born 13th January 1976) is a British actor. Born in Glasgow, Scotland but relocating to Kent in England, Ross began his acting career at a young age - in various theatre productions. At the age of thirteen he was chosen to play the younger version of Freddie Mercury in the Queen video for "The Miracle". His Star-Making Role came about in 2001 where he portrayed Joe Liebgott in the Tom Hanks-Steven Spielberg produced miniseries Band of Brothers.

Ross has alternated between British and American productions for most of his career - notably being adept at pulling off a Fake American accent on cue. His best known roles include Dave in the film Green Street, Matthew Keller in White Collar, Kenny Battaglia in Crash and Ron Clark in 24: Live Another Day. Most of the time you'll see him in a nice suit too.

In addition to that he's known for being engaged to Jennifer Love Hewitt for a time, being a massive Celtic supporter and campaigning to stop the hunting of whales.