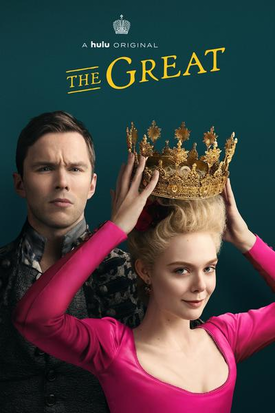 "My father used to say when a woman wants to kill you, you're in business."
Catherine: Ever since I was a child, I felt like greatness was in store for me. A great life, I felt. Like God himself had spat me forth to land on this Earth and in some way transform it. That I was here for a reason, a purpose.
Marial: Why did He make you a woman, then?
Catherine: For comedy, I guess.
Advertisement:

The Great is a 2020 Hulu original series about the rise of Catherine the Great (Elle Fanning). Catherine arrives in Russia an idealistic Plucky Girl and marries Emperor Peter (Nicholas Hoult). Upon realizing that Peter is a terrible husband and an incompetent emperor, Catherine begins to wonder if she can do a better job ruling Russia, and starts to plan a coup to put herself in charge.

It is written by Tony McNamara, who also wrote The Favourite, and favors comedy over historical accuracy, to the point of being billed as "an occasionally true story". The show also features Adam Godley, Phoebe Fox, Sacha Dhawan, Gwilym Lee, Sebastian de Souza, Bayo Gbadamosi, Charity Wakefield, and Belinda Bromilow.

The series premiered on May 15, 2020. Not to be confused with Catherine the Great, a more straightforward dramatization of the Empress's life that was released in 2019.