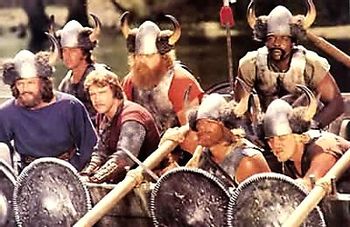 One of them is not like the others (no, not the guy without a helmet).
Advertisement:

This trope comes into play when an actor is cast for a role in a historical setting who would appear to be of an unlikely ethnicity to portray such a role, usually because the population of the historical setting tended to be predominately inhabited by people of a different ethnicity.

This may occur because the writers are unaware of the actual ethnic composition of the historical setting, value diversity over historical accuracy, have budget problems, or a myriad of other reasons. If the work is a comedy, this may also be simply Rule of Funny.

Depending on the time and place, this can actually be surprisingly realistic. Trade cities have always been ethnic mash-ups, and soldiers and sailors have always been extraordinarily diverse lots (see Moby-Dick for one such diverse crew of sailors). Some racial groups traveled farther from home much sooner than most people would assume—William Shakespeare didn't get the idea of a Moor in Venice from nowhere, nor did Emily Brontë get the idea of an Ambiguously Brown foundling raised by a pre-Regency English family from nowhere. Vikings in particular captured slaves from the non-Norse ethnic groups they raided, who could later be freed, and sometimes (albeit rarely) these freed slaves could become Vikings themselves. Thus a literal Black Viking would be quite unusual but not impossible. But — as there are no records of any black Vikings at all, and such a person would certainly have been noteworthy or at least a matter of curiosity, an educated guess might be, that there actually were none.

It is possible that when a Black Viking appears in film or TV, the character is not intended to be seen as the same race as the actor. The actor used might have simply been the best available for the role, and the writers are merely asking us to use our imagination to make the actor's physical appearance fit the character's. This is actually standard doctrine for modern stage theatrical productions as is called "non-traditional" or colour-blind casting,

referring to "the casting of ethnic minority and female actors in roles where race, ethnicity, or sex is not germane", in other words, where it is not relevant to the plot; Othello can never be played by a white actor, for instance, because his blackness is central to the plot (aside from special productions like one with Patrick Stewart in the title role while every other character is Black).

A Sub-Trope of Politically Correct History and Colorblind Casting. Compare with Not Even Bothering with the Accent and Race Lift. Related to Western Samurai, when a non-Japanese character is a samurai right down to the armor and strict adherence to the code of bushido.

No Real Life Examples, Please!. This is strictly a casting trope and not intended for use to describe historical figures.