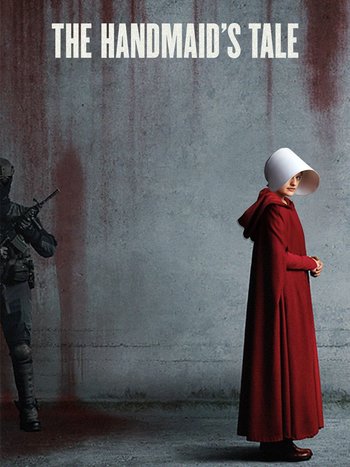 "Sterile. That's a forbidden word. There is no such thing as a sterile man anymore. There's only women who are fruitful and women who are barren."
"You can't change anything about this. It's going to end the same no matter you do what so there's no point trying to be tough or brave. Brave isn't any part of this. Everybody breaks."
— Nick Blaine
Advertisement:

A 2017 Hulu TV series based upon the novel The Handmaid's Tale, by Margaret Atwood.

20 Minutes into the Future, the world is suffering from a population crisis. All pregnancies have a one in five chance of surviving. In the midst of this crisis, the United States of America has been taken over by an extremist Christian regime and is now the nation of Gilead. All women are now second-class citizens. If anyone is caught breaking the laws by an Eye—such as a woman reading anything at all, or "gender treachery" i.e. homosexuality—swift punishment will follow, including but not limited to amputation, genital mutilation, or forced labor in the post-war wasteland of the "Colonies."

The story follows Offred (played by Elisabeth Moss), the Handmaid of Commander Waterford. Separated from her husband Luke and daughter Hannah, Offred—real name June Osborne—is now surviving day-to-day under Gilead's oppressive regime. However, she eventually finds out that there may yet be hope of escaping Gilead.

The series premiered on Hulu in April 2017. The series quickly exploded in popularity, and a second season released in April 2018. Due to the original novel being covered in the first season, everything from the second season onward is Adaptation Expansion. A third season released in June 2019. A fourth season came out in April 2021—production halted soon after its beginning in March 2020 due to the COVID-19 pandemic, and resumed in September 2020. It was confirmed in December 2020 that the series had also been given an early grant of a fifth season.

The Handmaid's Tale contains examples of: