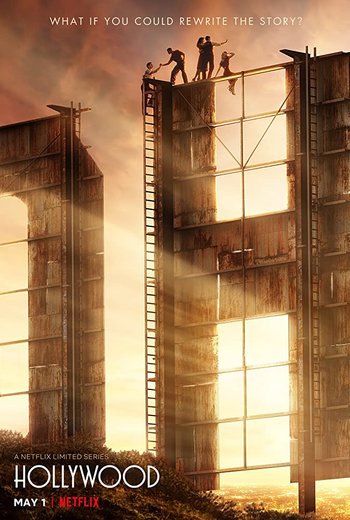 "I want to go to Dreamland."
"In two weeks, we'll either be looked at as the smartest people in Hollywood, or we'll never work again."
— Avis Amberg
Advertisement:

Hollywood is a period drama original series from Netflix, and headed by Ryan Murphy and Ian Brennan.

In Post-War Hollywood, a group of filmmakers and producers aim to change racial prejudice and homophobia through the release of a single motion picture. They face backlash and boycotts to produce the film, and most theatres are threatening to pull the film. The film they aim to make, a romantic drama called Meg, features a woman of colour in the leading role, and is produced and written by a diverse crowd of people. Only time will tell if the gambit pulled off...

The cast of characters includes: