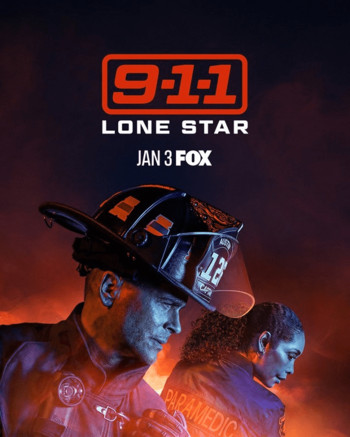 9-1-1: Lone Star is a firefighter and rescue procedural drama created and produced by the creative trio of Ryan Murphy, Brad Falchuk, and Tim Minear (known collectively for their work on American Horror Story), which was ordered by Fox in May 2019, it premiered January 19, 2020.

Taking place in Austin, Texas, the series tackles the lives of the 126 Fire House. After the fire house's rebuilding, a sophisticated New York firefighter, Owen Strand (Rob Lowe), relocates from Manhattan to Austin along with his son, Tyler Kennedy "TK" (Ronen Rubinstein). Owen must try to balance the duties of saving those who are at their most vulnerable and solving the problems in his own life.

Other than Owen and TK, the 126 includes Judson "Judd" Ryder (Jim Parrack), Marjan Marwani (Natacha Karam), Paul Strickland (Brian Michael Smith), and Mateo Chavez (Julian Works). Judd is married to Grace (Sierra McClain), who serves as a 9-1-1 call operator. The 126 works in conjunction with paramedics from the Emergency Medical Services, including captain Michelle Blake (Liv Tyler) and Nancy Gillian (Brianna Baker), and officers from the Austin Police Department, including Carlos Reyes (Rafael Silva), who becomes TK's boyfriend. In the second season, Michelle resigns as captain of the EMS and is replaced by Tommy Vega (Gina Torres).

A recap page is in the works. Contributions are appreciated.