Film / Song of the South 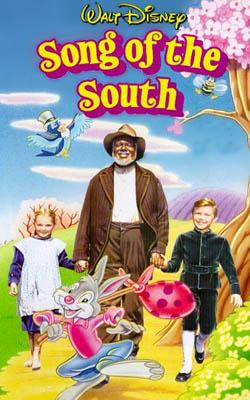 Song of the South is a 1946 Disney live action/animated musical film. You haven't heard of it? That's understandable; it has never been released in the US outside the theater, and not released at all since 1986. The film is, unbeknownst even to most of the people who have seen it (especially in Europe, where the context is lost), based on the Br'er Rabbit African-American folktales, as compiled and retold by Joel Chandler Harris in his late 1800s Uncle Remus books. It is notable that, although the Framing Device is accused of racism today, it was considered pretty Fair for Its Day, being written by a Southerner: Harris was attempting to compile African American folk tales that had been passed down from the days of slavery before they were lost.

The popularity of the book led to the popularity of archetypes such as Rascally Rabbit, the "Briar Patch" and the "Tar Baby" (the meaning of which tropes subsequently were lost to younger viewers after the film was sealed in the Disney vault in the '80s, when the stories themselves became forgotten by later generations unfamiliar with the work) which were taken straight from the original folktales. Some who maintain that the film should not be released note, however, that keeping these tales alive ties in too much with the days of slavery and Reconstruction, a shameful period in American history that they feel children should not be subjected to, at least not in a way that could be perceived as anything but monstrous.

Set in the Deep South after The American Civil War, the film features the kindly old Uncle Remus telling stories of Br'er Rabbit and friends to three children – Johnny, Ginny and Toby – from his rural cabin. Due to the "impression it gives of an idyllic master-slave relationship" (the film was probably set during Reconstruction, just so that Remus would not be depicted as a slave — though he almost certainly has been one) it will probably never be see any kind of release in the US. It was available on VHS in the UK (where the associated sensitivities are still present, but further from the surface) throughout the '90s and early '00s, and shown as an afternoon family film on TV. It was also aired a few times on the Disney Channel during the 1980s. A Japanese laserdisc (with an English track included as a bonus) was also released years ago, and it's become quite a collector's item with copies selling on eBay for several hundred dollars. Starting in 2017, Whoopi Goldberg has had talks to get Disney to release it in a limited capacity. In the meantime, some DVDs and Blu-rays at least include clips.note For instance, the Alice in Wonderland Un-Anniversary Edition DVD and 60th Anniversary Edition Blu-Ray include "Zip-a-Dee-Doo-Dah" and the following Br'er Rabbit story, as part of the 1950 Christmas Special One Hour in Wonderland, and the DVD reissue of the Disney Sing-Along Songs video Supercalifragilisticexpialidocious/I Love to Laugh retains "Everybody Has a Laughing Place". The film is notably absent from Disney+, with former Disney CEO Bob Iger noting that the company has no plans to redistribute the film through the streaming service.

Most younger Disney fans recognize two things from the film: the first is the song "Zip-a-Dee Doo-Dah", which was written for the film, won an Academy Award and has been featured on several Disney music albums. (In fact, they still use the theme in presently, due to having completely innocuous lyrics and a catchy tune.) The second is the Splash Mountain ride at the Disney Theme Parks, which omitted Uncle Remus but prominently featured Br'er Rabbit and his buddies... At least until 2020. In a bit of odd timing, it was announced in June that the ride is being re-themed in favor of The Princess and the Frog, another Disney animated musical based around African American culture with far fewer concerns about potential racial insensitivity. The plans had been set in stone for about a year and the company had planned to announce it earlier but ended up not after the project fell behind schedule because of the COVID-19 Pandemic.

In some European countries, like the Netherlands and Scandinavia, Br'er Rabbit comics were introduced in the early 50s, and remain popular and are still a regular part of the weekly Disney comics. Famous children's writer Enid Blyton wrote 15 volumes of short stories - some retelling the original folklore - featuring the Br'er Rabbit characters (although Uncle Remus is noticeably absent). And while the framing device with Uncle Remus was featured in the first comics, it has since quietly disappeared and faded into obscurity, to the point where only a few readers know that it ever existed. And while the film was released in Europe, it is virtually unknown there.

Song of the South provides examples of:

Br'er Fox and Br'er Bear try to get at Br'er Rabbit, creating a big cloud of dust, but the rabbit escapes within a little cloud of his own and hightails it for home.

Br'er Fox and Br'er Bear try to get at Br'er Rabbit, creating a big cloud of dust, but the rabbit escapes within a little cloud of his own and hightails it for home.