If you were looking for our page on the real Ku Klux Klan, go here. 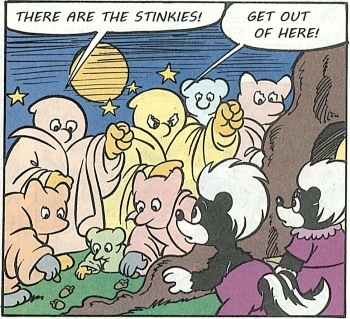 The Klansman costume: when no one is supposed to know you're racist.
"How the hell are we supposed to introduce ourselves?! 'Hello, we're the new death-dealing miltia of white supremacy, we're called the "Ku Klux Klan", affiliated with the "Wip Wap Wop" and the "Bingly Bongly Boo". We're easy to recognize, we're the ones wearing bedsheets and peeking out through the eyeholes of the massive pointy hats we wear over our faces!'"
— That Mitchell and Webb Look
Advertisement:

The Ku Klux Klan (or a fascimile thereof) has appeared a lot in fiction, especially in the Deep South. As one of the most well-known hate groups in history, and with their distinctive white robes, pointed hoods and their Religion of Evil, they are commonly found as Politically Incorrect Villains and sometimes Apocalypse Cults.

They almost always will have drawling accents, be hot-tempered, publicly ranting about how they want to kill anyone who isn't the same appearance as them (often with Cluster F Bombs and other slurs), and be as dumb as bricks (ironic because its earliest members had been classically educated, and "Ku Klux" itself was inspired by the ancient Greek word for "circle").

Related tropes are A Nazi by Any Other Name, Those Wacky Nazis, The Social Darwinist, White Gangbangers, Malevolent Masked Men, and Rebels with Repeaters.

Not to be confused with The Clan, despite the shared pronunciation.