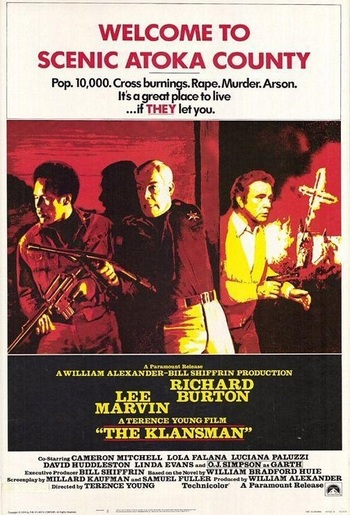 The Klansman is a 1974 American drama film directed by Terence Young and starring Lee Marvin, Richard Burton, Lola Falana, Linda Evans and, in his feature film debut, O. J. Simpson. It is based on a novel of the same name by William Bradford Huie.

When white woman Nancy Poteet (Evans) is sexually assaulted and beaten by an unknown man in a small town in the Deep South, the Ku Klux Klan, assuming the man is black, begins a campaign of terror against black people. Sheriff Track Bascomb (Marvin) tries to find the guilty party in the rape and calm down the racial tensions while seeking the involvement of Breck Stancill (Burton), a local landowner who helps the African-American community.

Meanwhile, Garth (Simpson) barely escapes with his life after an ambush by the KKK, but a friend of his is killed, after which Garth begins a vigilante set to take out members of the Klan.