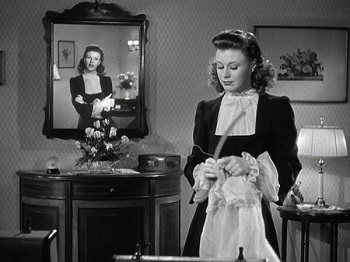 Mirror Kitty does not approve.
Advertisement:

Kitty Foyle is a 1940 romantic drama directed by Sam Wood and starring Ginger Rogers in the title role.

Kitty Foyle is a white-collar office worker in New York who is about to get married to her boyfriend, handsome doctor Mark Elsen. But just as she's preparing to elope, none other than her old boyfriend Wyn Stafford shows up. Wyn, who is both wealthy and married, is about to sail away to South America, and wants Kitty to accompany him so they can live in sin together. The main plot is then told in a series of flashbacks, as Kitty remembers how her relationship with Wyn started and how it went bad, and how she met Mark. Kitty then faces the dilemma of who to choose.

Kitty Foyle might come off as dated, creaky melodrama to a latter-day viewer, but in 1940 it was a critical and commercial success. Ginger Rogers, who had enjoyed some starring vehicles before but had mostly appeared in Busby Berkeley musicals and dance movies opposite Fred Astaire, benefited from the full force of the Tom Hanks Syndrome here, winning the Academy Award for Best Actress.