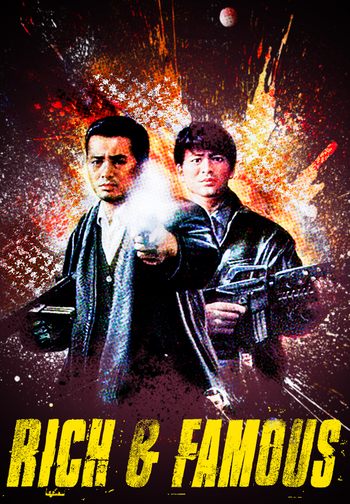 Rich and Famous is a 1987 Hong Kong gangster drama starring Chow Yun-fat, Andy Lau and Alex Man. Released in the same year as its sequel, Tragic Hero, but coming out a few months prior despite being chronologically set before, its one of the many Hong Kong films made in the boom of late-80s/early-90s Heroic Bloodshed cinema ever since A Better Tomorrow kicked off the genre a few years prior.

Lam Ting-kwok (Andy Lau) and Tang Kar-yung (Alex Man) are sworn brothers growing up together in the seedy streets of Hong Kong, and aspires to make it big in life after being introduced to the life of mobsters by their cousin Mak Ying-hung (Alan Tam). Through a series of misadventures, all three men ends up joining the triad empire of benevolent mob boss, Lee Ah-Chai (Chow Yun-fat).

Four years later, Kwok is happy with his life as one of Chai's most trusted subordinates. Chai will be married to his long-time girlfriend and fiancee, Po-yee. But Yung, once the sworn brother of Kwok, had ambitions to usurp Chai of his position of power.