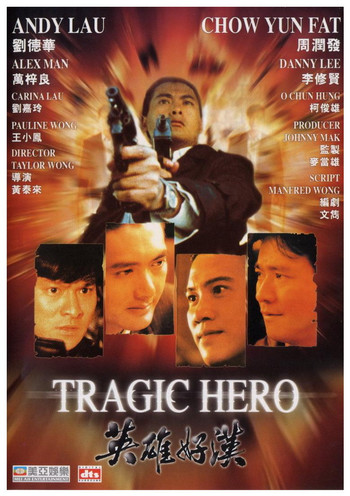 Tragic Hero is a 1987 Hong Kong Heroic Bloodshed film starring Chow Yun-fat, Alex Man and Andy Lau, a sequel to Rich and Famous (but somehow released before), this time with greater focus on the action aspects instead of the drama.

After the events of Rich and Famous, Lee Ah-chai (Chow Yun-fat) have since decided to focus on family life, having a son with Yee (now his wife) and deciding to move his family to Malaysia for their safety. With Chai out of the picture, Tang Kar-yung (Alex Man), previously Chai's former best friend have now risen through the ranks, becoming the leader of his own triad. Seeing Chai as a threat, Yung now have plans to have Chai eliminated.

Between all these is Lam Ting-kwok (Andy Lau), Yung's adopted brother and a wannabe gangster, who eventually decides to join Chai's side, assisting Chai on his family matters in Malaysia. Both of them are fated to be embroiled in a climatic showdown against Yung's growing triad army.

Contains what is probably the most explosive-laden finale

in Hong Kong cinematic history. Seriously, you can try a drinking game every time an explosion goes off in the final battle, but chances are you'll be too drunk to continue after 2 minutes.