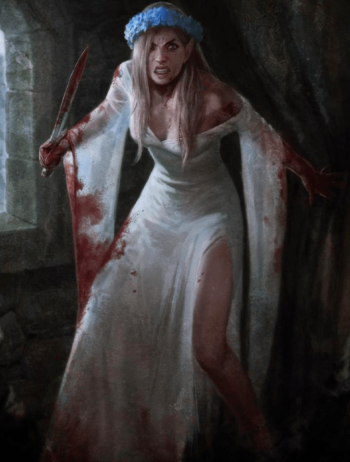 The Warden's wedding didn't go quite as planned...
"I saw you in your wedding gown, the prettiest dress
I came into your room that night and made such a mess
In my own way, I lovingly kiss the bride
With your ring in your hand, your eyes and your mouth open wide
In my eyes, blood drops look like roses on white lace…"
— Alice Cooper
Advertisement:

There's something about seeing a woman in a white bridal gown which is covered in blood. The juxtaposition of the joyous event the wedding dress is supposed to signify with the brutality or tragedy that the blood indicates makes for a striking image. The fact that the red of the blood stands out well against the white of the dress adds to this.

This can be used either to evoke sympathy in us if the bride has gone through something horrifying, or to alienate us from her if she has committed a horrific act herself. Or a bit of both. Sometimes just used to add some surreality to a scene.

The bride might have lost or discarded her shoes. For extra macabre, she might leave behind bloody footprints, either from the blood staining the dress or for having hurt her feet, further symbolizing the defilement of her happy day.

May overlap with Ethereal White Dress if its implied that the bride died in the dress. Compare with White Shirt of Death, Bloodstained Glass Windows and Snow Means Death. See also Wedding Smashers, which more often than not causes this. May overlap with Widowed at the Wedding. See also Wight in a Wedding Dress.