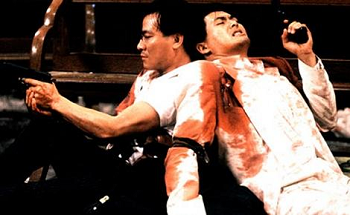 Two Blood Brothers about to spill some more blood; both their own and their enemies'.
"Honor is his code. Vengeance is his mission. Bloodshed is his only option."
— Tagline for John Woo Presents: Stranglehold
Advertisement:

Also known as Hong Kong Blood Opera, this is a genre of Hong Kong Action Cinema made popular by directors like John Woo and Ringo Lam and actors such as Chow Yun-fat. Heroic Bloodshed plots are primarily modern-day crime action pieces that focus on revenge, redemption or some kind of conflict between rivals or enemies on both sides of the law, with a special focus on gunplay. There's a very strong theme of honor, loyalty and betrayal in these movies, particularly those made by John Woo.

Characters spin, roll, and dive across the room while blasting away during shootouts, often with two guns at once. Often, a good dose of kung fu or other martial arts is also mixed in, especially when actors synonomous with that genre appear. Heroic Bloodshed films (as per the name) are also incredibly violent with lots of blood and high body counts before it's all over.

Protagonists are usually honorable criminals or hard-boiled enforcers of either the police or the criminal variety, resulting in very morally ambiguous plots, which makes for some interesting parallels with Film Noir.

Not to be confused with old-style martial arts films, nor Wuxia which is Chinese classical fantasy about feuding knights errant using Magical Martial Arts. These films instead prefer the modern cop and gangster milieu, and the martial art of choice is Gun Fu. Except when it's a Feng Shui game, then it's pretty much the same.

For more information about the genre, see The Other Wiki's article

open/close all folders
Anime and Manga
Comic Books
Film
Tabletop Games
Video Games
Video Game/Gungrave: These mainly show up as brief flashbacks in the first game, but becomes the crutch of the story in the anime adaption. Due to Brandon's fighting style, it still counts. There are themes of honor, code, family, and redemption in the games too.
Web Original
Western Animation