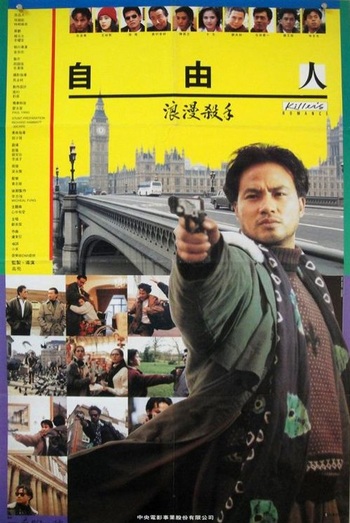 Simon Yam is about to shoot you. And he's not going to cry about it.
Advertisement:

Killer's Romance is a 1990 Hong Kong Heroic Bloodshed action film directed by Philip Ko Fei, starring Simon Yam (who just finished filming Bullet in the Head). The movie is a loose adaptation of the manga, Crying Freeman, and is in fact one of two Hong Kong movies based on Crying Freeman (the other being Dragon from Russia, released 3 months later) released in 1990.

Jenny is a university student in London who witnessed the killings of a mobster. The killer is none other than Jeffrey, raised since birth by the Yakuza, whose identity was supposed to be untraceable until Jenny inadvertently took a picture of Jeffrey on her camera. Now the mob wants Jenny dead, but Jeffrey had feelings for her after saving her life...

While Simon Yam would later become an icon in action cinema thanks to Bullet in the Head, Bullet For Hire and this movie, however his success is short-lived for in a baffling career change, Yam would instead go on to making sleazy, Cat-III Hong Kong movies where he would play as villains, murderers, or serial rapists. For Yam's fans in Asia, this is one of his few Cult Movies that they can still enjoy watching him as an action star.