Film / The Night Comes for Us 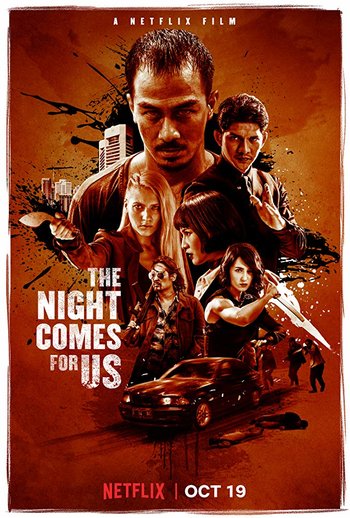 Salvation is a road paved in blood.
Advertisement:

The Night Comes for Us is a 2018 Indonesian martial-arts action film directed by Timo Tjahjanto. The film stars Joe Taslim in the lead role and includes fellow The Raid alumni Iko Uwais and Julie Estelle in prominent roles. The film was released worldwide through Netflix on October 19, 2018.

At the height of its power, the South East Asian Triad controls 80% of Asia's smuggling activities. Utilizing the notorious Golden Triangle as the main hub, the Triad profits heavily from illegal drugs, weapons and human trafficking. To keep the channels free from chaos and outside disturbance, the Triad leaders created a group of six elite delegates called the Six Seas, who are given free rein to use extreme measures to retain order and obedience.

One of the Six Seas, a man named Ito, has grown tired of the bloodshed. After leading a massacre against a village for stealing from the Triad, Ito chooses to betray his employers save the life of the sole survivor, a young girl named Reina, in a desperate search for redemption. Seeking help from his old friends in Jakarta, Ito sets off a violent conflict with the Triad as he seeks to secure Reina's safety.

A sequel, called Night of the Operator, is currently in development.

The Night Comes for Us contains examples of the following tropes: