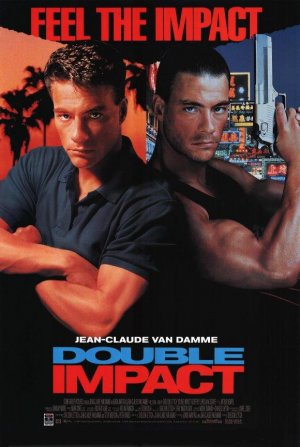 Released in 1991 and starring Jean-Claude Van Damme, Double Impact is often said to be a better Double Dragon movie than the actual live-action adaption.

The story begins 25 years ago with the opening of the Hong Kong Victoria Harbour tunnel by business partners Paul Wagner and Nigel Griffith (Alan Scarfe). Paul attends with his twin baby sons, Chad and Alex. However, after the celebrations, the family is followed home by a Triad hit squad on orders from Griffith and crime lord Raymond Zhang (Philip Chan). A shootout ensues, in which Paul and his wife are killed by the bodyguard Moon (Bolo Yeung). Chad is rescued by the family bodyguard, Frank Avery (Geoffrey Lewis), and raised abroad. Alex is dropped off on the doorstep of a Hong Kong orphanage.

Those 25 years later Chad (Van Damme) and Frank run a successful martial arts business, and Frank reveals to Chad that he has a twin brother. Alex (Van Damme) turns out to be a streetwise punk in the Hong Kong criminal world. When finally meeting Alex, they get off on a rocky start. But there is no time for them to bicker as they have to fight Zhang and Griffith gang to get their revenge and claim the tunnel as theirs.