Film / Army of One 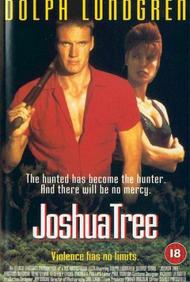 Army of One (aka Joshua Tree) is a 1993 American action film directed by Vic Armstrong, then known mostly for his stunt coordinator and second-unit director work.

The film stars Dolph Lundgren as Wellman Anthony Santee, a former Baja race car driver who has turned to a life of crime after the death of his mother. With his friend, Eddie Turner, Santee hauls exotic stolen cars for a car smuggling ring.

At the beginning of the movie, Santee transports another shipment through the desert, but a Highway Patrol officer pulls him over. While Eddie tries to reason with the cop, a pair of detectives named Frank Severance and Jack "Rudy" Rudisill show up, who kill Eddie and the patrolman, and severely wound Santee, pinning the murders on him.

Escaping from his prisoner transport unit following a botched execution attempt by Dirty Cops, Santee sets out to get even with those who betrayed him and killed his friend. Along the way, he kidnaps an off-duty deputy sheriff, Rita Marrick - needless to say, things then start to develop between the two...

The film was originally released with the title of Joshua Tree, but due to the popular U2 music video released at the time, it was renamed to the more recognised Army of One.

Not to be confused with the 2016 fact-based Iraq war satire of the same title, directed by Larry Charles (Borat) and starring Nicolas Cage as an average guy who takes it upon himself to find and assassinate Osama Bin Laden. Nor should it be confused with Army of Two, a Third-Person Shooter developed in 2008 by EA Montreal.

In the desert, there is no law. There are only tropes: