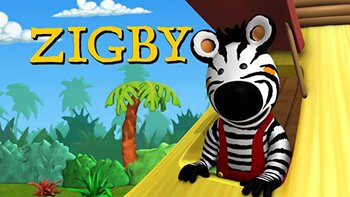 Zigby is an Australian-Canadian-Singaporean cartoon that airs on CBeebies and Treehouse TV.

Zigby (Tracey Moore) is a cheeky zebra who's always "trotting into trouble". He goes on adventures with his friends McMeer the meerkat (Brian Drummond) and Bertie the bird (Matt Hill).

"On a tropical island far away..."