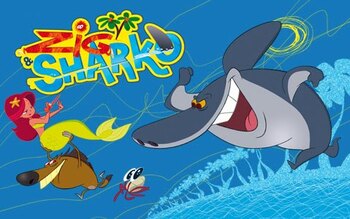 Zig & Sharko is a French animated television series produced by animation studios Xilam, known for their animated series Space Goofs and Oggy and the Cockroaches (in fact, one could say Z&S is O&TC's younger brother/cousin). It is created and directed by Olivier Jean-Marie, who also worked as writer, storyboard artist and director of both series.

It revolves around an animal frequently on a tropical island — Zig the hyena — trying to capture Marina the mermaid, with the help of Bernie the hermit crab, so he can eat her. However, Sharko the shark is there to protect her. And that formula, where Zig is usually using various ways to try and devour Marina, most with the help of Bernie — but Sharko knows how to stop him, is what happens way often... Hilarity Ensues.

Then in the year 2016, a second season was released. Marina ends up arriving on the aforementioned island and calls for various sea creatures to arrive. That place becomes a beach-like paradise as a result. As for Zig and Bernie, they unintentionally see an abandoned plane in the forest, and meet its pilot... who can be best described as being "loony". Further hijinx still ensue in its third season (released in 2019), where various characters decide to get on a cruise ship.

78 shorts of 7-minute length were produced for the first season, which is available on Netflix. Also, selected episodes are free to watch on Rovio's streaming site ToonsTV by agreement with Xilam. See Xilam's website