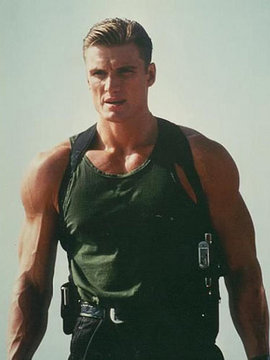 He must break you.
"When I started studying acting in New York, I didn't plan to be an action hero. I just wanted to learn acting because I felt it was something I needed to try to do for myself, to express something, my inner pain, or something I couldn't get out."
Advertisement:

Hans "Dolph" Lundgren (born 3 November 1957 in Stockholm, Sweden) is an actor from Sweden, often viewed as "the poor man's Arnold Schwarzenegger" (but is no less of a Mr. Fanservice). He has won European and Australian karate championships, as well as represented the United States in the 1996 Summer Olympics in pentathlon. He may be one of the best Real Life examples of Hidden Depths, as despite being famous for playing Dumb Muscle characters, he has a master's degree in chemical engineering. He is rumoured to have a genius-level IQ, but he denies it.note In the commercials for Brain Games on the National Geographic channel he mentions that he has an IQ of 160 (which is genius level), as well as his master's degree in chemical engineering.

Lundgren's first foray in the film industry was a minor role in A View to a Kill as a KGB mook, Venz, who has two seconds of screentime. He got this role thanks to his then-girlfriend Grace Jones. After that, he got his breakthrough role in Rocky IV as the Russian boxer Ivan Drago, which launched his career in action movies.

Lundgren's first starring role was in the Live-Action Adaptation of Masters of the Universe as He-Man in 1987, whose fight against Skeletor is taken to Earth. This was followed by Rambo-esque Red Scorpion in 1988, where he plays a Soviet special ops soldier who is sent on an assignment in Africa but ultimately turns against his own after witnessing the atrocities they have committed. After that he was cast in the comic book film The Punisher in 1989, where he played the titular vigilante and got bad press for not wearing the iconic skull shirt.

At about the mid 90's, Lundgren gradually disappeared from the consciousness of the movie-going audiences but remained active doing smaller DTV movies. After his time in The Expendables along with an All-Star Cast, he had something of a Career Resurrection, including prominent roles in Arrow and Aquaman. He also featured prominently in the music video for Imagine Dragons' single Believer.

Some people consider him proof that the axiom "All other factors in a fight being equal, the biggest guy wins", especially after watching him knock Jet Li on his butt in The Expendables.

True fact: a bunch of burglars broke into his house and tied up his wife and daughter in 2009

. Luckily, before they got to anything serious they saw a family photo and realized they had just tied up Dolph Lundgren's wife. This was in itself enough reason for them to let her go and run away very quickly, thus also saving some wear and tear on the He-Man sword. Unfortunately both wife and daughter suffered from PTSD and trauma after the incident.

Drago's not a machine, he's a man!

Example of:
Not So Invincible After All

Drago's not a machine, he's a man!