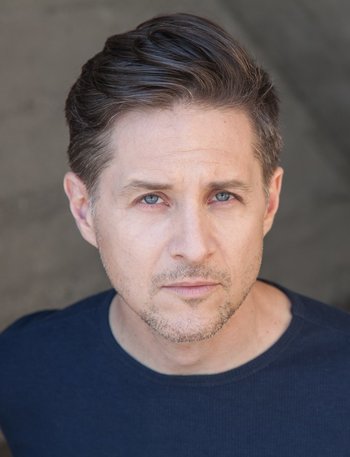 Yuri Lowenthal (born March 5, 1971) is an American actor and voice actor who is probably one of the most prolific voice-over artists in the industry right now. In fact, his work is getting so common in the North American industry that he may as well be his own trope. He is usually cast as the Kid Hero of the series, some examples being Simon, young Superman and the most notable of them all, the teenage Ben Tennyson. Despite all those roles, he is probably best known as the voice of Anti-Hero Sasuke Uchiha in Naruto. Most of his voice work has shifted towards video games or western animation. However, he still continues to do anime voice work from time to time either with Studiopolis, Bang Zoom! Entertainment, or NYAV Post.

He has provided the voice of Luke fon Fabre in Tales of the Abyss, Kamal in the Halo tie-in Alternate Reality Game I Love Bees, and Cecil Harvey in the Nintendo DS remake of Final Fantasy IV and Dissidia Final Fantasy. Ironically, he doesn't voice Yuri Lowell in Tales of Vesperia; that role went to Troy Baker instead.

His range tends to be rather limited, with most of his roles demanding nothing more than "normal American accent", which is close to his normal voice anyway (although this is probably due to him being typecast quite a lot). Saying that, he can also pull off a pretty good Creepy Child voice and has a wide range of regional accents for when the role calls for them. He is also often not identifiable when playing multiple ancillary characters.

He is married to fellow VA Tara Platt, who voiced Mitsuru in Persona 3 where he voiced the MC. He and Tara also co-authored a book called Voice-Over Voice Actor: What It's Like Behind the Mic, which gives their personal experiences in voice acting and advice to newcomers. This book is often referenced and recommended by many veteran voice actors at conventions like Steve Blum, Crispin Freeman, Sam Riegel, Kyle Hebert, and Vic Mignogna.

Also acted as the main character in the Van Von Hunter movie. Perhaps fittingly, his character became a massive otaku over the course of that film.

And yes, his first name is Yuri. We're sure he's heard every joke you have in mind.

And did we mention that he's good friends with Doug Erholtz?

Yo buddy, still alive?
Let's go, partner!
And don't forget the hyphen between "Spider" and "Man".